For many years, Lama Tsering and the Sangha at Odsal Ling have had the aspiration of finding special lands where practitioners could carry out longer retreats. The right piece of land needed to be large enough, environmentally inspiring, capable of sustaining a community, and not very far from the temple. During these years, an extensive search had not revealed any good options. Then, unexpectedly, an auspicious opportunity to make a purchase arose. A large area located just behind the Temple was offered to us for sale.

It is with great joy that we are inviting the whole Sangha to participate in this acquisition, which will open many possibilities for Odsal Ling and for the preservation of the Dharma.

Contribute to the purchase of the land!

Lama Tsering has explained that we have 3 conservation objectives with the purchase of this land:

Preservation of the Lineage

Throughout the history of Buddhism, especially in the Tibetan tradition, we find a precious line of individuals who practice teachings whose essence is altruistic love and compassion -  fundamentally human values ​​that are now more necessary than ever. By creating refuges where these teachings can flourish, we are also protecting and disseminating these values ​​to society as a whole and to future generations.

Preservation of an altruistic community

The creation of a place where people with a similar way of thinking and who cherish these values ​​can work together to put them into practice. This includes a commitment to respect the life of all living beings equally and to promote happiness and harmony among people. Chagdud Gonpa has over 30 years of experience building and maintaining communities that are based on these values. The expression of these values ​​in a long-term community has a positive impact that extends well beyond the limits of the land. This project is our opportunity to continue helping people who do good.

The land is part of the green belt of the metropolitan region of São Paulo, which stands out as a rare reserve of the Atlantic Forest of the urban biosphere defined by UNESCO.  The land is a true ecological treasure, with a great variety of different ecosystems, a varied forest and beautiful valleys. The benefit of preserving a place like this also extends to the residents of São Paulo, given that untouched forests are sources of clean air and water.

Our aspiration for the land

AThe property covers 22.4 hectares of native forest, with rich and diverse vegetation, including two valleys that are important sources of water.

Expansion of the activities of Odsal Ling

Many possibilities can be explored after purchasing the land. At the moment, the central idea is the development of a project integrated with nature, with minimum environmental impact and preservation of the benefits generated by the forest. Based on this premise, we envision:

Extended retreats are a traditional method practiced by our lineage In small retreat huts, sheltered in the heart of nature and isolated from the bustle of the city, practitioners will find the ideal conditions for the practice of deep meditation. 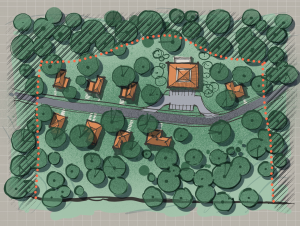 The Nagmo Forest Project follows the precepts of conservation and sustainable development. Here we see an exuberant mass of Atlantic Forest formed by several examples of native flora, including endangered species such as Araucaria angustifolia. The vegetation of the region sustains a diverse fauna including various species of birds and mammals.

Furthermore, our land is part of the green belt of the metropolitan region of São Paulo, which stands out as a rare urban Biosphere Reserve defined by UNESCO. Located within the Atlantic Forest, it brings many benefits to the city of São Paulo through a balanced ecosystem, protecting natural springs, regulating the climate, reducing pollution, and preserving biodiversity. Embu das Artes has undergone accelerated urbanization, where the few remaining plots of native forest have become targets for high-density real estate development - protecting the remaining areas is critical. Most of these forest fragments, including the Nagmo Forest, are in different stages of regeneration. Thus, the project includes the enrichment of plant species, so that the vegetation can become more similar to how it was originally.

With the purchase of lands and our commitment to preservation and low occupancy, we will be respecting and protecting the lives of many animals and trees, and contributing to the maintenance of the green belt around São Paulo.

Help protect the Dharma and our forests!

The Nagmo Forest Project is an immense field of merit. By making your offering to purchase this land, you are establishing interdependence with Chagdud Rinpoche's activities and helping to reach future generations

Together, we form this great mandala that sustains the continuity of our tradition, the continuation of the Dharma for future generations and the preservation of our forests. We are counting on the long-term vision and the generous support of the entire Sangha and friends for financial donations for the accomplishment of another auspicious project by Lama Tsering and Lama Norbu.

Any donation is welcome! For those who feel particularly inspired by a certain aspect of the project, it is also possible to contribute to a specific purpose. Please check below:

Lama Norbu, Celina, Andréa, Michel, Eric and Ingrid can provide more information about the project by email at [email protected], or you can speak to us directly to answer any questions you may have.